Bet You Watch Which Way Your Dog Wags Its Tail After Reading This..... 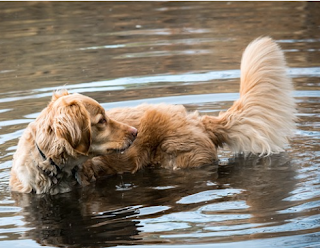 In 2007, a study was published in the journal 'Current Biology' that showed that the different sides of a dog's brain will dictate which way the dog will wag its tail!

A dog will wag its tail to the right side of its body when he is feeling happy, confident or positive about approaching something because the left side of a dog's brain (which controls the right-sided tail wag) specialises in behaviours such as "approach" and "energy enrichment."

Conversely, a dog will wag its tail to the left when it is feeling scared or wants to retreat from a situation as the right side of its brain (which controls the left-sided tail wag) controls the feelings of "energy expenditure" and "withdrawal."

Don't be embarrassed to admit that you're going to check this out the next time your dog wags its tail to the left or right....I did too! 😊