How To Deal With A Cat Scratch Or Bite 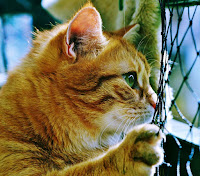 Many cat owners may never have to deal with a scratch or bite but should it happen here are five tips  that may well come in handy.
Hopefully you will never have to use the above tips but should you be unfortunate enough to suffer a cat bite or scratch, then the advice will go some way to ensuring that ensuring minimal infection occurs.

This advice is not a substitute for medical attention which should always be sought in cases of infection by animals.