Anxiety May Give Your Dog This.... 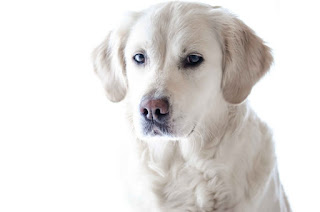 My curiosity was piqued recently when I came across a study stating that anxiety may prematurely give dogs grey hair. Interested to know why some of our canine friends tended to go grey around the muzzle area earlier than others I was keen to know more.

The study was carried out among 400 dog owners in Colorado USA who were each given a 42 item questionnaire that required them to fill in details about their dog's age, health and behavior.

The researchers took 2 photographs of each dog and used the criteria that the dogs had to be below 4 years of age as older dogs would should show greyness due to simply natural ageing. Dogs with light colored fur were also excluded as greyness in lighter colored dogs may be more difficult to ascertain.

To help ascertain the dog's anxiety levels the researchers then went on to ask questions regarding the dog's behaviour (destroying things when left alone, nervous around people etc) and impulsivity (jumping up at people, hyperactivity, ability to stay calm/focus etc).

After the photo's of the dogs were independently analysed and the behavioral information was studied the findings proved interesting and included:
It was noted that the study may well prove to have practical implications for dog welfare. People working with young dogs that notice premature greyness could alert owners to potential anxiety issues in their pets.

The full study was published in the December 2016 issue of the Journal Applied Animal Behaviour Science.