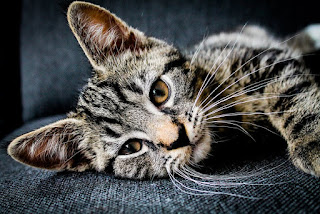 Ever wondered why we call male cats 'Tomcats'? It hasn't always been so and I thought I would share with you how the name Tom evolved when referring to our male feline friends.

Although the term Tom is believed to have been attributed to young male kittens as far back as 1300, the commonly used term Tomcat became more widely recognised in 1760 after the publication of an anonymous book 'The Life And Adventures Of A Cat'. Prior to the book's publication male cats were actually commonly referred to as 'Rams' and 'Boars'!

The main character of the aforementioned book is a male cat called Tom and the popularity of the book ensured the term Tom became synonymous with male cats.

The popular cartoon 'Tom and Jerry' created in 1940 and starring the animated cat 'villain', Tom, served to popularise even further the name and term in male cats by both name and attribution.

The paperback version of the book 'The Life And Adventures Of A Cat' was reprinted in 2010 and is available online.