Why Are Onions Toxic To Dogs And Cats? 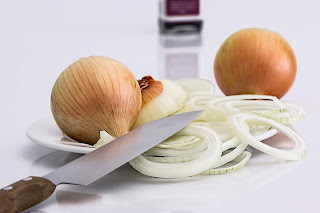 So here I am leafing through my dog-eared copy of the February, 2011 edition of the Brazil-based Journal of Venomous Animals and Toxins including Tropical Diseases when I come upon a review article that says onions will cause hemolytic anemia in cats. Ya think?


Maybe news travels a little slower down there. My column reported, back in 1999, that onions cause Heinz-body hemolytic anemia in dogs, cats, ferrets and monkeys, and since then a lot has been written about the issue. A large number of pet owners have become aware of it as a result. But I digress.

Actually, I wasn’t going through the above named journal, but the October, 2011 issue of “Catnip,” a publication of the Cummings School of Veterinary Medicine at which quoted the Brazil-based journal in its “Mews in the News” section under the headline, “Study validates that cats should not eat onions.”

I found what I consider to be a crucial error. The section’s author quotes the Brazilian journal as saying that onion toxicosis is “consistently noted in animals that ingest more than 0.5 percent of their body weight in onions at one time,” then goes on to add (quoting Catnip now), “which translates to a 10-pound feline eating about one-half pound of onion.” That’s an easy math error to make, I suppose, but it’s a serious error.

If I did my gozindas correctly, a ten pound cat would only have to eat about eight-tenths of an ounce of onion to exhibit signs of onion toxicosis. A half pound equals one-half of one percent of a 100 pound animal’s weight, not a 10 pound animal. So, even highly credible, authoritative resources can make mistakes.

The toxic element in onions, garlic, shallots, leeks, scallions and chives is a chemical called N-propyl disulfide. Interestingly enough, there have been reports of Heinz-body hemolytic anemia in some dogs caused by skunk spray, because of alkyl mercaptans and disulfides found in the substance a skunk releases when it sprays.

The toxic element ruptures red blood cells (RBCs), releasing molecules of damaged hemoglobin called Heinz-bodies The RBCs ability to transport oxygen throughout the body is now impaired. Cooking and spoilage doesn’t reduce the toxicity of onions and the others in that family; neither does converting them to a powder.

Although Heinz-bodies (which are visible under the microscope) may be present within a day after your pet eats onions, the anemia typically develops several days later. If your dog has onion breath, that’s the first sign that appears.

There’s no specific antidote for onion poisoning. If you act within one or two hours of ingestion the veterinarian can induce vomiting (back on the block we just called it gastrointestinal decontamination) and feed activated charcoal, then, going forward, watch for signs of the anaemia and treat that. Severe cases may require blood transfusion and oxygen therapy.

Our Guest Poster for this article Bob Bamberg has been in the pet supply industry for more than a quarter century, including owning his own feed and grain store in , .  He writes a weekly newspaper column on pet health, nutrition and behavior and his articles appear on Niume.com https://niume.com/profile/103112#!/posts   and HubPages.com http://hubpages.com/@bobbamberg
Posted by Cat And Dog Tips at 17:03