A Quirky Food Factor That May Interest Cat Owners.... 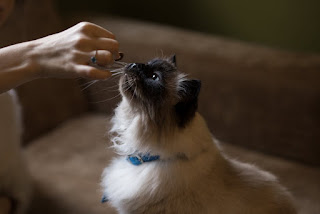 I often read that cats can be finicky eaters and whilst this may be true of some of our feline friends anybody who has spent time observing the feeding habits of feral cats may beg to differ.

Cats left to their own devices are known to scavenge and live on a less regal diet than their more spoilt family-owned cousins but you may be surprised to know that a study has shown that cats actually have an in-built sense of the nutritional value of the food they eat.

A study conducted at the Waltham Centre for Pet Nutrition threw up some interesting findings that concluded that although cats are initially drawn to food by its aroma and flavour they tended to consume the more nutritional foods if the option was available.

Fish was shown to be the subject cats favourite flavour but believe it or not the cats gravitated toward consuming the more nutritional food regardless of flavour.

Interestingly Orange flavoured food was a popular choice for the cats in the study because of it's nutritional composition.

Should you be changing your cat's diet? Well no, many commercial cat foods today are composed with the nutritional content catered for but there is some great advice on what to consider when feeding your cat on at the bottom of a well written summary article of the pet nutrition study mentioned above here