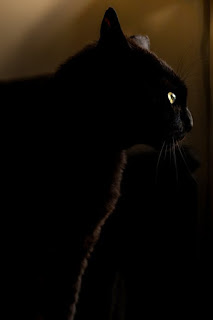 Black cats are often associated with good or bad luck and there are many articles written that refer to the superstitions and folklore that surrounds them. Less well known characteristics of black cats are often overlooked and below are five things that you may not have known about them.

A black cat's eyes are typically golden, or yellow, in color and this is because the over-production of melanin that makes their fur so black often causes the cat's irises to reflect this melanism and produce the pigment that gives this golden or yellow coloring.

To be a true black cat both of the parents need to carry the black color gene. Though this sounds a fairly simple equation, what you may not know is that the dominant cat fur gene is actually tabby and it is only the added presence of a recessive gene known as a non-agouti that suppresses these tabby markings.

In a cat where this gene is not fully suppressed you may notice that close up, or more especially in bright sunlight, you can make out the faint tabby stripes on the animal's tail or legs and also perhaps see the M marking on the cat's head that is more often characteristic of a tabby cat.

There are said to be around twenty breeds of cat that can produce a black offspring but the only breed of cat that is all black is the Bombay cat and they are often referred to as miniature panthers.

A high degree of exposure to sunlight can lead to a black cat's fur to temporarily take on a rusty reddish- brown appearance. This rusty appearance can also be seen when the cat has an absence of an enzyme called tyrosine.

There is a growing appreciation of black cats around the globe and this is shown in the fact that there are days designated to the celebration of the dark furred feline. What may be less known is that some of the better-known celebration days actually have different dates and this has caused some confusion on social media among the black cat loving fraternity.

Can Cats And Dogs See Spirits? 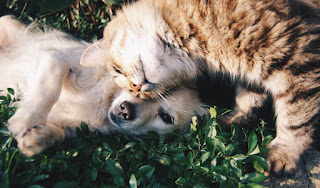 Thought I'd have a break from the norm and write about the potential supernatural powers of cats and dogs.

A lot has been written about about pets in relation to a kind of 'sixth sense' that they are thought to possess. I read an excellent book recently entitled 'Dogs That Know When Their Owners Are Coming Home And Other Unexplained Powers Of Animals' by Rupert Sheldrake which covers many of the topics around this suggested sixth sense such as premonitions, telepathy etc and it inspired me to study the less well known capabilities of the pets that we share our lives with.

A study carried out by Biologists at City University London found that, contrary to previous opinion, cats and dogs seem to see in UV light. It has long been theorized by some in the the ghost hunting fraternity that spirits are more readily seen in UV light and Ultra Violet lighting tools are sometimes used on ghost hunting expeditions.

A lot of my research has led me to some interesting finds that, although offering no hard evidence, certainly seem to suggest that our pets may see things that we don't on a supernatural level.

Take the story of Del Johnsen a woman who passed away leaving seven dogs and six cats. Witnesses reported her pets acting in a way post-death that suggested that the owner was visiting her pets daily and interacting with them as written about here

Cats and dogs have long been associated with being guides to the spirit world. Cats were allegedly prized by witches as it was thought that cats could be trained to be alert to both good and bad spirits as written about here

I have had personal conversations with pet owners that are convinced that their cat or dog interacts with a playmate that has passed on and many of the conversations relate in detail about the pets only behaving in this way when their pet pals that have passed away were around.

I think it's fair to say that cats and dogs show a lot of intuitive unexplained behaviours and their inability to communicate what they see will always leave us wondering. What I do know is that there is a lot of anecdotal evidence that suggests that cats and dogs react and interact with things that we cannot comprehend which may include spirits. 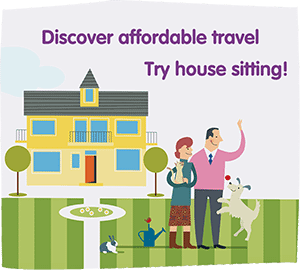 A Few Hidden Gems About Cats That You Might Enjoy 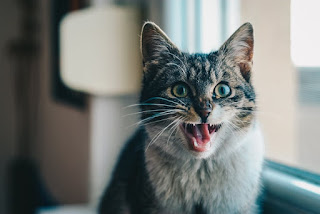 I've been trawling the net lately looking for a selection of interesting cat related gems. Below are a few feline related things that may be of interest to cat owners.

Cats working for the UK government

Believe it or not, the British government feeds around one hundred thousand cats that help to keep down the mice population at it's various properties!

Cats actually do 'claim' us

An interesting study in America showed that only 25% of cat owners actually went out with the intention of acquiring a cat. In the remaining 75% of the cat owning population the cats were spontaneously acquired.

Studies have shown that cats have a higher chance of survival falling from a higher storey of a building than a lower one. Cats were determined to have a non-fatal terminal velocity of around 60 miles per hour. There are documented cases of cats surviving falls from as high as 30 storeys. The cats ability to orient themselves mid-air was considered the main factor in high survival rates when falling from buildings.

It is estimated that cats in the United States kill around 5 billion rodents and 1 billion birds every year!

Cats have whiskers on their legs

Cat owners may be forgiven for not noticing this but cats have whiskers on the rear inside of their front legs around the dew claw area. The reason for this is up for debate but it's thought that the sensory nature of these added whiskers may be an added bonus for the cat to determine the nature of caught prey as their short distance vision is not so sharp.

The whiskers referred to above are known as carpal whiskers or to give them their fancier term carpal vibrissae.