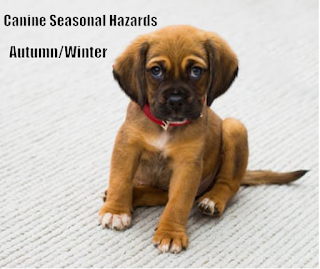 Now that the days of summer have slipped by we all begin to turn our thoughts to events like Halloween, Bonfire night and preparations for Christmas. There’s lots of activity going on in the kitchen with Christmas fare and warm comforting casseroles being made. Long walks in the countryside with our dogs is also high up on our weekend agendas. So begin aware of hazards in the home and outside is important at this time of year. Check out some of them here.

Grapes and dried vine fruits (currants, sultanas, raisins)
Grapes and their dried products are poisonous to dogs. Eating just a small quantity can result in kidney failure. Foods that have high quantities such as Christmas cake, puddings and minced pies contain high concentrations and are especially dangerous.

If alcohol is left unattended, dogs may help themselves to left-overs! Alcohol is absorbed rapidly in the dog’s system.  They will show similar symptoms to a person when they have drunk too much but problems occur at much lower quantities.  Incoordination and drowsiness are common signs.  Alcohol is a toxin and in severe cases it can cause respiratory distress, a dangerously low body temperature and low blood sugar (hypoglycaemia) leading to collapse and coma.

Onions (including other Alliums: garlics, leeks, shallots and chives – even sage and onion stuffing!)

Foods that belong to the Allium plant family are poisonous to dogs, even when cooked.  Relatively small amounts can cause disturbances to the gastro-intestinal tract. Symptoms include vomiting and diarrhoea. The main effect is on the red blood cells leading to anaemia (lowering of red blood cells). Poisoning isn’t always obvious immediately after ingestion but illness can occur several days’ later, making diagnosis more difficult.

This nut is often used in Christmas cakes. If eaten, they can cause a high body temperature, tremors and stiffness in the limbs.

Most dog owners are aware of chocolate toxicity. Theobromine is the name of the toxin responsible for poisoning. The higher the percentage of cocoa, the more toxic it becomes. So whilst all chocolate is toxic, a dog would only need a very small amount of 70% dark chocolate to become extremely ill. White chocolate is generally not a risk as it has very low levels of theobromine. Signs of toxicity include agitation, hyper-excitability, heart problems and convulsions.

Oak and acorns contain a toxin called tannic acid. Ingestion leads to gastro-intestinal and kidney problems. Bloody diarrhoea and vomiting are the main signs of poisoning and dogs will often show abdominal pain.

Very organised people are thinking ahead and topping up the car with anti-freeze in preparation for the winter months. It is very toxic to all mammals, especially cats so think about them and other animals that visit the garden. Neat or run off fluids are toxic so make sure that any spills are washed away with copious amounts of water. Signs include vomiting, diarrhoea, an increased heart rate, lethargy and a low body temperature.

Conkers are synonymous with autumn. Although cases are rare, dogs will become ill if they are ingested. Throwing them to play catch can pose a serious threat too. Not only can they cause an obstruction in the gut, they contain a chemical called aesculin – found in all parts of the horse chestnut tree, including the leaves.
Signs include vomiting collapse, diarrhoea, restlessness and abdominal discomfort. Some dogs can go into toxic shock, experience respiratory paralysis and in severe cases can die. Signs of illness can occur within a few hours after consumption but sometimes symptoms don’t occur until after a couple of days.

As well as the usual health and safety advice for bonfire night, fireworks can contain a number of different chemicals that are dangerous to dogs and other animals if ingested. These include fuels, metals, colouring agents, phosphorous, sulphurs and nitrates.
Signs include vomiting, diarrhoea, abdominal discomfort and incoordination.

Around this time of year, glow sticks are also a cause for concern. These tubes are made of a bendy plastic containing a liquid called dibutyl phthalate that glows in the dark. Dogs, especially puppies, might be attracted to them to chew. They are extremely unpleasant to taste and even small amounts will cause excessive hyper-salivation and foaming at the mouth. The liquid is very irritating to the skin and eyes. For ingestion of glow sticks, lots of oral fluids will help dilute the chemical.
Irrigation of the eyes with water or sterile saline is recommended and use luke-warm soapy water for exposure to the skin.

What first aid treatment can you carry out?

ü  Contact your veterinary surgery and tell them exactly what your dog has ingested. They will be able to provide you with the best treatment whist waiting to see them.

ü  Making your dog sick can cause more problems and is often not recommended - Never make your dog vomit if:

ü  Activated Charcoal is often used by vets to absorb the toxin. However there are a number of toxins that are not absorbed by charcoal and for more serious poisons a charcoal biscuit is unlikely to be sufficient.

This article was written using information from the veterinary poisons information service (VPIS).
The VPIS offers a helpline for pet owners. Details are available by following this link: https://www.animalpoisonline.co.uk
Posted by Cat And Dog Tips at 03:46