It's Cool For Men To Love Cats Too! 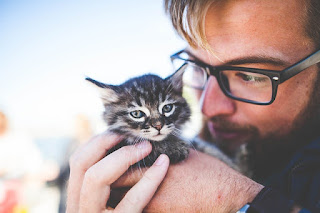 Pretty much all of us have encountered the term 'Crazy Cat Lady', it's so famous now it's almost a brand and gift ranges have sprung up celebrating it.

What many perhaps don't realise is the popularity of cats amongst men. Many male celebrities openly celebrate their feline love and surveys such as this show that a rise in cat ownership is being driven by males.

Famous men that own cats include:

Ricky Gervais - UK animal lover Ricky has a cat called Ollie who has his own Facebook fan page here
Ed Sheeran - We came across Ed's love of cats accidentally....a tiny Japanese 'cat island' sent out a plea for Ed to visit them after discovering he was a cat lover. Ed's instagram feed is full of kitten pictures and he is the proud owner of a beautiful cat that he adopted as a kitten who goes by the name of Graham.
Norman Reedus - The Walking Dead star not only owns a cat called 'Eye in the Dark' who joins him everywhere but Norman's feline friend even has his own 'fan run' twitter account here

Other famous males that are cat lovers and owners include George Clooney, Ewan McGregor, Nicholas Cage and John Travolta.

A famous historical figure who was well documented as a 'cat fan' was...

Mark Twain - The famous American writer was so infatuated by cats that he owned 19 of them! Twain's love of cats has him credited with some pretty feline friendly quotes such as...

'When a man loves cats, I am his friend and comrade, without further introduction' and
'If man could be crossed with the cat it would improve man, but it would deteriorate the cat'

An interesting cat related tale about Mark Twain states that when one of his 19 cats went missing he took out a newspaper ad that offered a $5 dollar reward. After the cat returned home on it's own a steady flow of people came to Twain's door with feline impostors so that they could meet the great man!

The term 'Crazy Cat Men' may not be as well publicised as it's female counterpart but the above maybe helps to show that men are not too macho to show their love and adoration for our feline friends.