How Do You Find A Puppy Without Supporting A Puppy Mill? 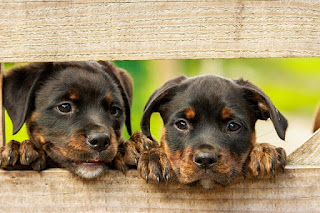 So, you want to buy a puppy, but you want to do it right. That’s cool. Support good breeders all the way!.

First, a question. Is the puppy a gift? If so, remember, pets should NEVER be given as gifts, and decent breeders will not sell a dog for someone to give as a gift

How do you find a puppy without supporting a puppy mill?

Sometimes that’s harder than it seems. Aside from avoiding those pet store pups and any that can be purchased over the internet, how do you know?

Some mills are smaller, harder to see, but are still putting profit above the welfare of their animals. On top of that, finding a good breeder with a litter of puppies can take more than a year.

Not all breeders are great. Even some of those listed on sites like the AKC breeder recommendation list don’t fall into the category of a “good breeder.” The AKC doesn’t have the capacity to inspect every breeder they certify and have acknowledged such.

Puppy Mill run out of a house

Some breeders might look good from the outside but be running small puppy mill operations out of their home or another location.

Some breeders may not have that many dogs, but if they don’t care for the health of their females, and breed them repeatedly for several litters, the breeder still fits in the category of using the animal for profit.

Some breeders think they are doing everything right but don’t health test. These breeders aren’t contributing to the future health of their breed and therefore do not care about the welfare of the dogs.

Some breeders don’t want to offer you any guidance after you purchase the dog. This is not necessarily a sign of a puppy mill but just a sign of a breeder worth avoiding.

Ok, all these no’s probably aren’t helping you figure out how to tell what a GOOD breeder looks like and how to find one.

A breeder you found online is neither a good or a bad one although their website may give you some information about them.

The first sign that you have found a good breeder is if you feel a little interrogated, politely of course. Questions you should be asked include:

·         Who in your family will be responsible for the pup’s daily care and training?

·         Can you provide both veterinarian and personal references?


·         Are you willing to sign a contract agreeing to return the dog should anything change in your situation?

·         How old are the mother, father, and their parents? The mother and father should be 2 or older and the parents preferably 5+.

·         Do you health test? Will you provide me with the results of these parents/grandparents?

·         Do you breed any other dogs? Breeders with multiple kinds of dogs are not likely to be good breeders.

·         Are you willing to answer my questions after a puppy comes home with me?

·         Do you have a contract?
Molly O’Hara is the author of Callie’s Wag, a blog dedicated to her puppy mill rescues and others like them. In addition to her blog, she has regular bylines in two local newspapers regarding animal topics, and often can be found under a pile of cats and dogs, trying to reach her computer.
Posted by Cat And Dog Tips at 13:59 No comments:

Avoid Calamities at Christmas for your Cat 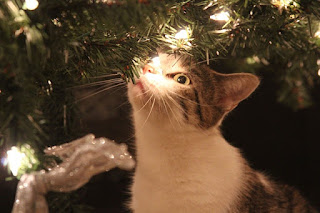 Now that the festive season is upon us there will be lots of preparations for Christmas. Whilst this is a happy time for most of us, it can bring about additional stress and potential problems for our feline family members.


Here is the lowdown on some of the common hazards along with some hints on how to prevent feline foes during the festive period.

Festive Plants
Mistletoe contains toxic compounds and, although considered to be fairly low in toxicity, some cats develop drooling, vomiting, diarrhoea and abdominal discomfort within a few hours after eating it.  The toxic part of the plant is the leaves and stems rather than the berries. In rare cases tremors or convulsions have been reported so it makes sense to keep them well away from your cats.
Poinsettia is a Euphorbia species of plant. Although it does contain a toxin it is less toxic than most other Euphorbia.  Almost half of the cases reported to the Veterinary Poisons Information Service remained well after eating Poinsettia.  However, it can cause irritation to the mouth and stomach with drooling, vomiting and in-appetence.  Occasionally, animals may develop a high temperature and have more severe stomach irritation with bloody vomiting or stools. Keeping plants out of harms reach is therefore a good idea.
Lilies are often included in Christmas bouquets. Many varieties are dangerous as they are highly toxic to cats. Ingestion of any part of the plant, including drinking the water they have been stood in, poses a high risk. Kidney failure and fatalities are a strong possibility. Prevention is very much the advice for this particular plant. Don’t wait for symptoms to arise. Immediate veterinary attention should be sought if you suspect ingestion.

Christmas Trees & Decorations
Christmas tree species include spruce, fir and pine.  These trees are considered to be of low toxicity but if eaten may cause mild stomach upset such as vomiting and diarrhoea, and they could cause gut obstruction if eaten or injury to the G.I tract if needles are sharp.
Loose needles can drop in to ears too.  Signs of this include sudden onset ear irritation and head shaking.
Lametta - Cats and kittens tend to be curious about most decorations but lametta is one of their favourites. It catches the light and oddly some cats like to chew and swallow it. If enough is consumed a tight ball in the gut could cause an obstruction.


Salt Dough Decorations pose the hazard of salt poisoning in dogs and cats. A decoration may contain around 8g of salt per tablespoon which is very high. As well as vomiting and diarrhoea, symptoms can include a raised heart rate, high blood pressure and kidney failure. Consequently prompt veterinary attention is important.

Scent profile is important for making a cat feel safe and secure. Christmas paraphernalia brought in to the home brings in new and strange smells. This can be very stressful for a cat. In an attempt to restore their own scent, some use urine to mark the house. Rather than scold them, which is likely to make the problem worse, it’s important to help them feel secure again. However prevention is better than cure.

What can we do?
Caroline Clark is a consultant in animal behaviour counselling and you can find more information at www.peteducationandtraining.co.uk 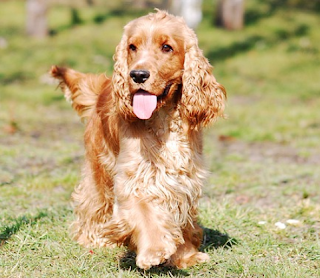 We gather around the dinner table and between moments of witty repartee, demurely introduce a modest fork or spoonful of food into our mouths, chew it anywhere from 10 to 30 times, and let it slide down the hatch.

A pack of dogs, on the other hand, would gather around the carcass and between moments of fierce competition, rip off a huge chunk of something, chew it once or twice, and as its going down the hatch, be clamping their jaws on another chunk of something.

We’re designed to eat several small meals each day.  Dogs are designed to eat one big meal because, in the old days, they never knew when they’d get their next meal.  It could be a day or two, or even longer, before they’d eat again.

We have relatively small stomachs (for some of us, in our dreams) that accept food which has already been partially broken down; by chewing and mixing with our saliva, which contains powerful enzymes that begin to break the food down.

The dog has a relatively large stomach with an extremely acidic environment; loaded with powerful digestive enzymes and up to three times as much hydrochloric acid as we have.  Those huge chunks of food are lubricated with saliva and slide down the hatch into a stomach that grinds and liquefies the food.  The saliva itself contains no enzymes.

The liquefied food, called chyme, then passes into the small intestine where absorption of nutrients into the blood stream takes place, aided by digestive juices from the pancreas and gallbladder.  Although the intestinal tract is about 4 times the length of the dog’s body, it’s still shorter than that of a human.

That’s because carnivores need the food to move quickly through their system because they’ve got work to do and can’t be lying around waiting for their food to digest.  As nomads, they need to patrol and defend a territory, protect mates, offspring and other pack members, and they’re already hunting for their next meal.

Most domestic dogs gulp their food the same way their wild counterparts do, barely chewing it.  Nor do they pause to savor the flavor; since they have practically no sense of taste.  Satiated, the next time they think of food will be when they’re hungry, or when you open or cook something and the aromas get their attention.

We and our dogs look at food very differently.  To us it’s an art form and a focal point of our culture.  We take great pains to optimize how it looks, smells and tastes, and when company comes over, we bring out food.

To dogs, food is strictly utilitarian.  They eat to live (while many of us live to eat).

Bob Bamberg has been in the pet supply industry for more than a quarter century, including owning his own feed and grain store in South-eastern Massachusetts, USA. He writes a weekly newspaper column on pet health, nutrition and behaviour and his articles appear at  http://hubpages.com/@bobbamberg
Posted by Cat And Dog Tips at 03:00 No comments: