Some Interesting Studies Regarding Dogs And Children. 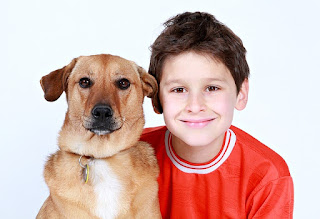 After reading a study that concluded children who were close to their dogs were also more likely to be closer to their parents and best friends. I decided to delve deeper into the relationship between dogs and children.

It appears that our canine friends are a far more positive influence on our kids than we may have realised.

Another study here showed that in a a test group comprising of pre-adolescents delivering a speech, the half of the group accompanied by their pet dogs showed a less stress-related response than the half that didn't. It seems that simply interacting with their dogs during a potentially stressful event allows children to feel calmer and more confident.

To further compound the stress-alleviating qualities of dogs around youngsters, another study showed that when left alone, with a parent or with a pet dog the children were less stressed and more relaxed around the dogs.

Factors attributed to the dogs in the aforementioned studies having such a positive influence in calming children could include the fact that dogs are non-judgmental or a good distraction from stress-related events.
It appears that it wasn't just the fact that they owned a dog but the dog's interaction with the children that had a positive effect on the youngsters.

One thing is for sure, the myriad use of dogs in therapy is not without good reason and man's best friend is a good influence on men, women and children.